There is a lot going on the site of the new Hospice Peterborough Care Centre! Check out the construction blog below to see some awesome drone footage posted by Mortlock Construction! END_OF_DOCUMENT_TOKEN_TO_BE_REPLACED

Thanks to Mortlock Construction for sharing this aerial video of the construction site – taken around May 9, 2018.

All photos taken in the last 24hrs. Except the last one taken February 26 to show the difference three months can make! [showhide type=”post”]

It’s hard to keep up with the progress of construction! Almost all roof trusses are on and today workers began putting down roof plywood. I am amazed at how high the roof line is on the south side of the building. Such a difference in grade from London Street to the south end of the property. A beautiful gift; a beautiful home for our community. Blog reminder: Click on any photo to enlarge the view. [showhide type=”post”]

Thanks to Craig Mortlock for these two amazing photos of your community Hospice – taken May 1, 2018 [showhide type=”post”] 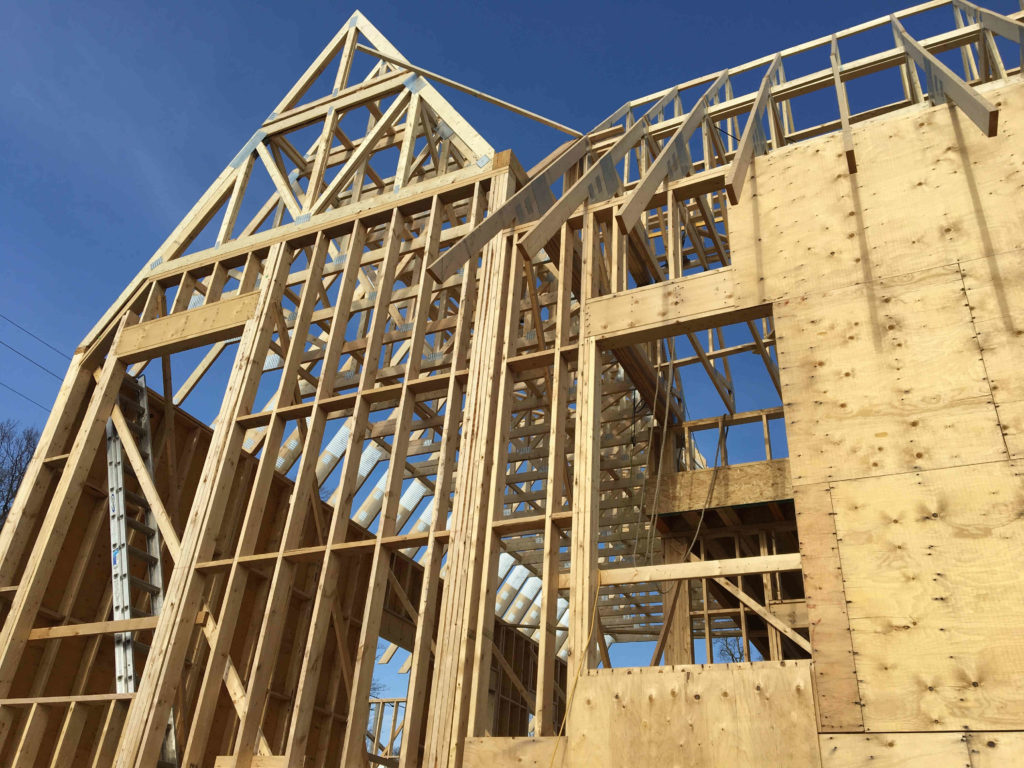 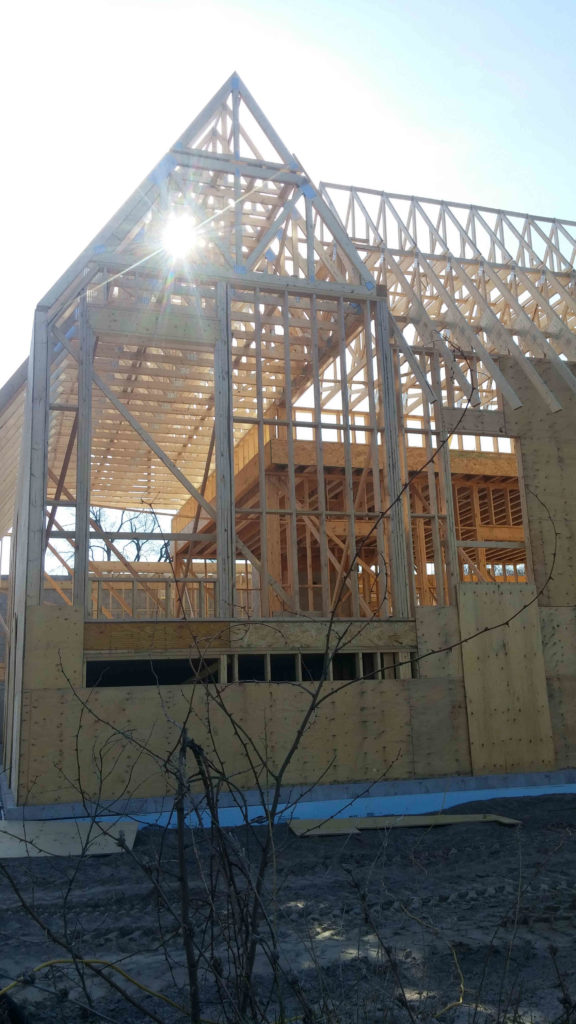 Today workers began framing the remaining four bedrooms of your new community Hospice. You can see the large bedroom windows just left of center in the photo below. [showhide type=”post”] 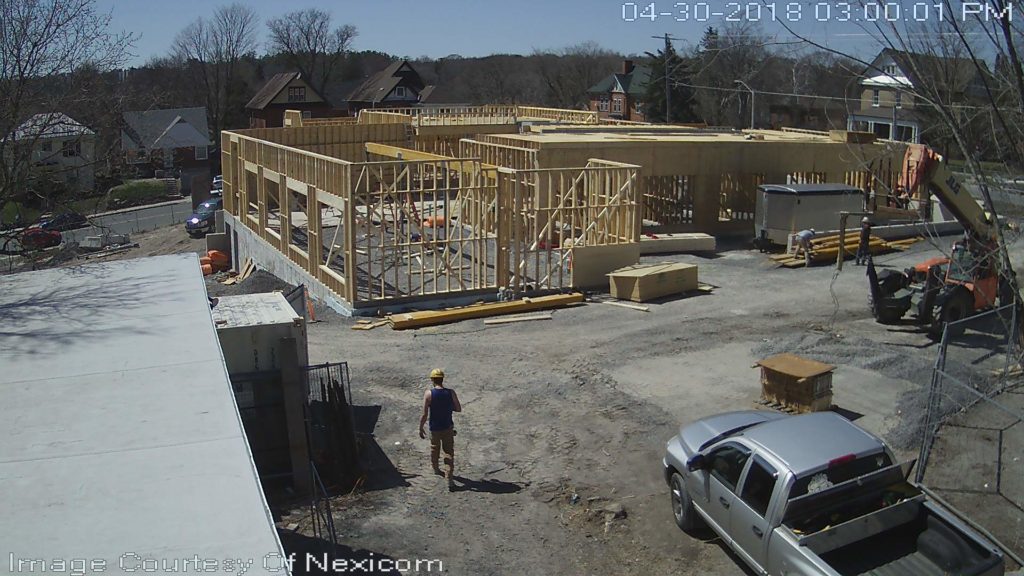 I have had the privilege of being a Hospice Singer since the group began, serendipitously, more than nine years ago. We modeled ourselves after the Hallowell Singers, a group of singers associated with a hospice in Vermont.

I would like to share a few words of Kathy Leo, one of the founders of that group:

“Bedside singing calls for the singer to be present, to be intuitive and deeply respectful of another’s process, and to be a quiet witness of death. We are not performing. We do not expect an audience. We see this singing as a service – for the person dying before us, for the families saying good-bye to a loved one, for the caregivers working quietly and constantly in the background, for ourselves and the expansion and evolution of our own spirits and for the culture as a way to begin to shift the lens we view death through.

Each time we sing we experience and learn and grow in this practice. Here is a snapshot of what a sing might sound and look like:

We sang in several different rooms at PRHC – each one a unique and enlightening experience, to say the least. It is often so hard to know how our songs are received when there appears to be no immediate response. And yet… and yet there are nonverbal ways that indicate our songs have found a place to rest with someone when their eyes light up or there is a slight movement of a hand or a foot.

Initially, Laura seemed more interested in getting her bed adjusted than our singing. But when we started to sing, her eyes were completely locked with Cecilia’s and she thanked us at the end, saying our singing was lovely.

Glenn was restless and confused and had his TV on and told us we could sing what we wanted. It was hard to know what songs would reach him. But as we sang, he closed his eyes and the singing seemed to have a calming effect on him.

We visited a room with two Hospice clients. Ruth asked if we knew any spirituals and so we began with “Peace Like A River.” With each verse, Ruth would beam a smile at us, nod and give a thumbs up, responding to the words by saying “so true.” Dale bowed her head as we sang and just listened. They enthused about our harmonies, as did one of the young hospital workers who was bringing up a cart of bedding when we came out into the hall. He was a lover of music in general and loved what he heard.

One of the last rooms we sang in had two young people sitting near the bed of their grandmother who was propped up, but non responsive. As we quietly sang “Angels Hovering Round,” the two young people reached for each other’s hand and leaned into each other for support. At the end, the young man said, “she would have loved that.” We also sang “Edelweiss” and as we hummed our way out into the hall a third grandchild greeted us with a warm, teary smile, cellphone in hand. She had held the phone into the room as we sang so her mother (and the daughter of the patient) could hear us. Apparently “Edelweiss” was a favourite in the family. The young woman said, “I hope my grandma heard it.” I personally believe she did.

If any of you are interested in this practice, I highly recommend reading Kathy Leo’s book, called “On the Breath of Song: the Practice of Beside Singing for the Dying.” There are copies available in the Hospice Peterborough Library. Or call Paula Greenwood at (705) 742-4042 ext. 225 to find out how you might join the Hospice Singers.

Categories: News & Stories, Story
We use cookies on our website to give you the most relevant experience by remembering your preferences and repeat visits. By clicking “Accept”, you consent to the use of ALL the cookies.
Cookie settingsACCEPT
Manage consent

This website uses cookies to improve your experience while you navigate through the website. Out of these cookies, the cookies that are categorized as necessary are stored on your browser as they are essential for the working of basic functionalities of the website. We also use third-party cookies that help us analyze and understand how you use this website. These cookies will be stored in your browser only with your consent. You also have the option to opt-out of these cookies. But opting out of some of these cookies may have an effect on your browsing experience.
Necessary Always Enabled
Necessary cookies are absolutely essential for the website to function properly. These cookies ensure basic functionalities and security features of the website, anonymously.
Functional
Functional cookies help to perform certain functionalities like sharing the content of the website on social media platforms, collect feedbacks, and other third-party features.
Performance
Performance cookies are used to understand and analyze the key performance indexes of the website which helps in delivering a better user experience for the visitors.
Analytics
Analytical cookies are used to understand how visitors interact with the website. These cookies help provide information on metrics the number of visitors, bounce rate, traffic source, etc.
Advertisement
Advertisement cookies are used to provide visitors with relevant ads and marketing campaigns. These cookies track visitors across websites and collect information to provide customized ads.
Others
Other uncategorized cookies are those that are being analyzed and have not been classified into a category as yet.
Save & Accept
Powered by